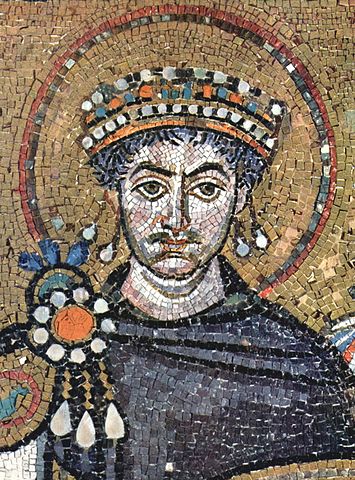 Let us stay in the 6th century for a bit, but this time move to the East. Justinian I (c. 482 C.E. – 14 November 565 C.E.), known as The Great – which I deliberately place in inverted commas – was Byzantine Emperor from 527-565 C.E. He is considered a saint by the Easter Orthodox Church. He famously married his mistress Theodora, a professional courtesan, who became extraordinarily influential in the politics of the Empire. Justinian sought to revive the Empire’s greatness by reconquering the lost western half of the Roman Empire. He oversaw the uniform rewriting of Roman Law, the Corpus Juris Civilis, which is still the basis of civil law in many modern states. Unfortunately he also wrote many laws, and changed earlier ones; for example forbidding women from getting divorced except under very specific circumstances, whereas previously, because marriage relied on the concept of consent, women could divorce by simply not wishing to be married any more. All they needed do was send a note to their husbands informing them of the fact. Without consent, there was no marriage under earlier Roman Law. Now, a woman could divorce her husband only if one of the following reasons applied:

Not quite the same thing.

Also, Justinian closed Plato’s Academy in Athens, and introduced two new statutes which decreed the total destruction of paganism, even in private life. Below is the description of what these led to, by the historian Procopius.

Procopius of Caesarea (500 C.E. – c. 565 C.E.) was a contemporary of the Byzantine Emperor Justinian I. He is considered the last major historian of the ancient world. He wrote the Wars of Justinian, the Buildings of Justinian and the celebrated Secret History, from which the following excerpt is taken.

And many straight away went everywhere from place to place and compelled such persons as they met to change from their ancestral faith.1 And since such action seemed unholy to the farmer class, they all resolved to make a stand against those who brought this message. So, then, while many were being destroyed by the soldiers and many even made away with themselves, thinking in their folly that they were doing a most righteous thing, and while the majority of them, leaving their homelands, went into exile, the Montani, whose home was in Phrygia, shutting themselves up in their own sanctuaries, immediately set their churches on fire, so that they were destroyed together with the buildings in senseless fashion, and consequently the whole Roman Empire was filled with murder and with exiled men.

And when a similar law was immediately passed touching the Samaritans also, an indiscriminate confusion swept through Palestine. Now all the residents of my own Caesarea2 and of all the other cities, regarding it as a foolish thing to undergo any suffering in defence of a senseless dogma, adopted the name of Christians in place of that which they then bore and by this pretence succeeded in shaking off the danger arising from the law. And all those of their number who were persons of any prudence and reasonableness showed no reluctance about adhering loyally to this faith, but the majority, feeling resentment that, not by their own free choice, but under compulsion of the law, they had changed from the beliefs of their fathers, instantly inclined to the Manichaeans and to the Polytheists, as they are called. And all the farmers, having gathered in great numbers, decided to rise in arms against the Emperor, putting forward as their Emperor a certain brigand, Julian by name, son of Savarus. And when they engaged with the soldiers, they held out for a time, but finally they were defeated in the battle and perished along with their leader. And it is said that one hundred thousand men perished in this struggle, and the land, which is the finest in the world, became in consequence destitute of farmers. And for the owners of the land who were Christians this led to very serious consequences. For it was incumbent upon them, as a matter of compulsion, to pay to the Emperor everlastingly, even though they were deriving no income from the land, the huge annual tax, since no mercy was shown in the administration of this business.

He then carried the persecution to the “Greeks,” as they are called, torturing their bodies and looting their properties. But even those among them who had decided to espouse in word the name of Christians, seeking thus to avert their present misfortunes, these not much later were generally seized at their libations and sacrifices and other unholy acts.3

1The polytheistic religions of Greece and Rome, the adherents of which were simply called “Hellenes”, i.e. Greeks; and various Christian and Jewish sects.

2Caesarea in Palestine was the birthplace of Procopius